The Resident Camp and Day Camp were organized in 1966 by Jim Welch as an integral part of the program of the Elmwood Presbyterian Church in Syracuse, NY. In that first summer, the Day Camp operated at the church for one two-week term, and the Resident Camp operated for one week at the presbytery-owned Vandercamp. The entire staff was made up of volunteer adults and college students.

In 1969, Jim moved to Pittsburgh, PA and expanded the Day Camp to the Fox Chapel Presbyterian Church (FCPC). The first ten years in Pittsburgh, the resident camp used Pittsburgh Presbytery’s Camp Fairfield near Ligonier, Pennsylvania, until the facility was sold in 1978. Then, for two years, we used a small college campus in West Virginia. In 1981 the camp purchased and began developing the 140-acre Lake Gloria site in the Laurel Highlands of Pennsylvania. This facility has operated at capacity with a growing waiting list since 1981.

An agreement between the Cambria Somerset Authority and Summer’s Best Two Weeks opened the door to the development of a first-rate organized summer youth camp and a Family Recreation Park on the shores of beautiful Lake Quemahoning in Somerset County.  SB2W @ the Que, just nine miles from Lake Gloria, opened its doors to campers for the 2003 summer.

During the first couple of decades at FCPC, inner-city youth from Pittsburgh shared in SB2W camping experiences through a partnership with Youth Outreach Unlimited.  Since 1981, we have provided a 1-week camping experience for an increasing number of inner city youth. In 2006, we expanded our SB2W Citikidz program by renting YMCA Camp T. Frank Soles for the month of August and facilitating three 1-week camps for 420 urban youngsters.  On October 5, 2012, The Usher family gifted Laurel Mountain Christian camp to SB2W which is now the cite of Citikidz, impacting over 600 youth over the course of seven terms.   For more information about SB2W Citikidz, check out www.citikidz.org

How we got our name:
Presbyterian Life, the official magazine of the Presbyterian Church, USA, visited camp in 1970 and printed an article in their August issue titled, “Summer’s Best Two Weeks”. A young camper had commented that his time at camp was the “best two weeks of the summer.” The name fit…and it stuck. 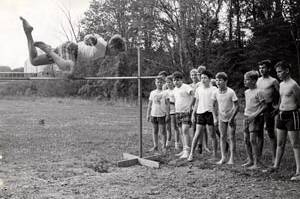